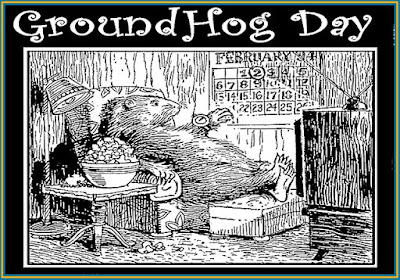 Today's animal star, the groundhog (Marmota monax) is also known as a woodchuck, or even, Kazeusus knows why, a whistlepig.

The characters in Walt Kelly's "Pogo" comic strip of the Days Of Yore, also called them "groundchucks" and "woodchunks." 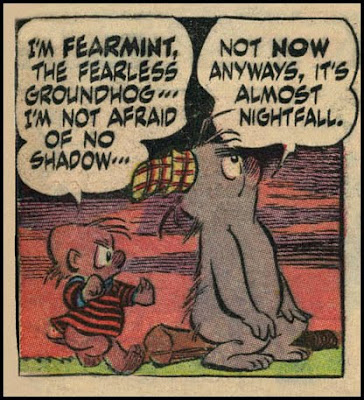 The multi-aliased groundhog is a rodent of the family Sciuridae, belonging to the group of large ground squirrels known as marmots.  Not "varmints," "marmots."  Young groundhogs may be called "chucklings."  Here's a groundhog chuckling now: 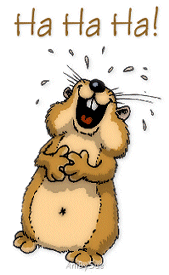 So-- back in the Olden Days, the Germans looked for the badger coming out of hibernation on "Candlemas Day," midway between the winter solstice and the spring equinox.  If the badger saw its shadow, a "second winter" was on the way.  Bummer.

Meanwhile, back in the States, in 1887, they chose a native hibernating animal, our pal, the whistlepig groundchunk, for this less than remarkable holiday..

Of course, the real reason these animals come out of their hibernation holes is for sex.  Maybe a snack after.

That's pretty powerful motivation.  A fella might get up out of a long, dead sleep for sex and food.  If it were only for weather prognostication, a scene like this might ensue. 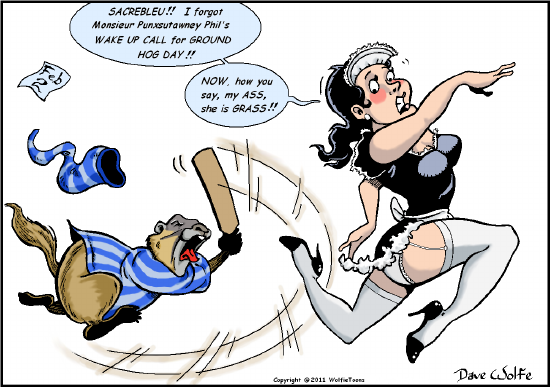