Ghost Writers In The Sky!

So Larken says, "I have a cartoon you should do!"

"EeeeeYESSSsss?" I replied like the guy on Jack Benny, confusing the younger people with an obscure reference.

She told me and I Laughed Out Loud!  I would have Rolled On the Floor Laughing, but there's always stuff in the way down there.

The results are at "DISCIPLINE & DESIRE" this week! 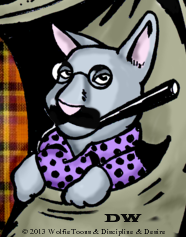 There have occasionally been other WolfieToon writers!  In fact, "D&D" editor Reesa Roberts had a contest once, and the winners got free stuff!  This was the Third Place Entry. 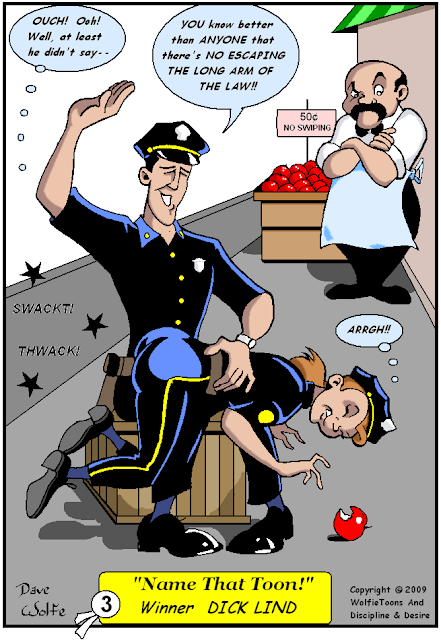 My buddy who signed himself "Charlie Tunasheart" suggested several cartoons over the years, like this one: 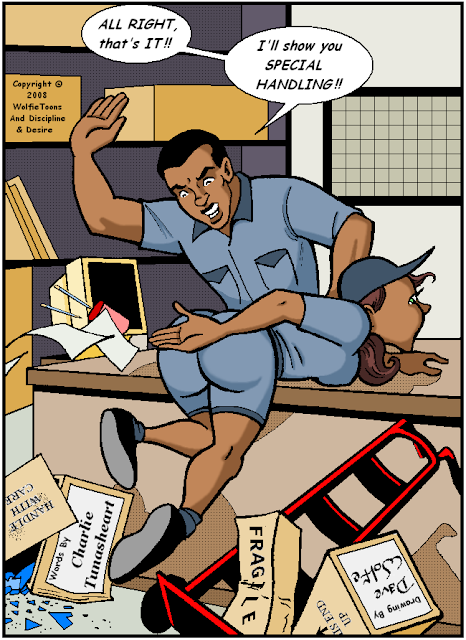 So if you have a favorite fantasy or idea, I'm always open to suggestions.  Hope you enjoy the offerings over at "D&D" this week, too!

Harem Pants and the Lack Thereof

So what is the actual name of that billowy garment associated with harem girls and belly dancers?  Harem Pants?  Turkish Trousers?  Genie Jeans?  I am uncultured and do not know.  Nevertheless, they are almost featured in this week's WolfieToon at "Discipline & Desire!" 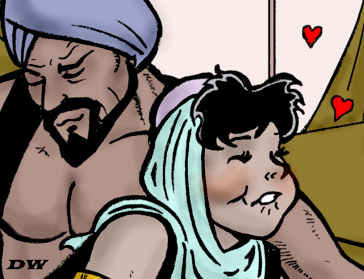 And on that note--  did Jeannie just get a swat on her beautiful bottom?! 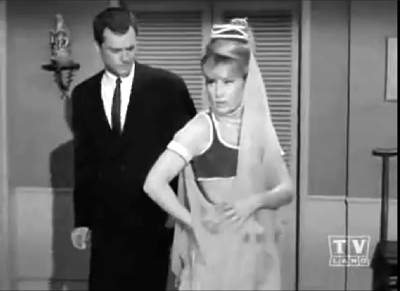 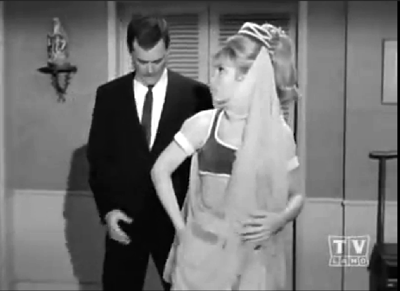 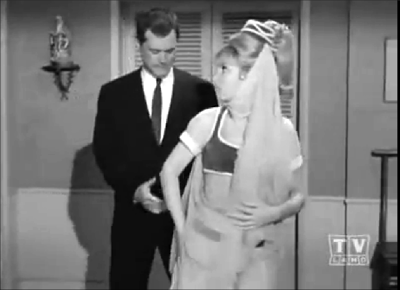 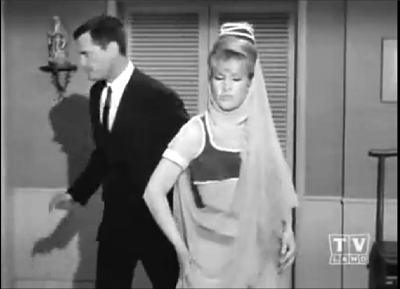 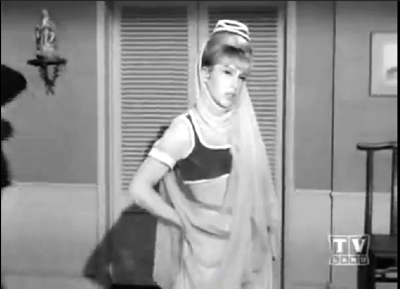 Well, no, not really!  Sorry!  Those pics are from the first season episode, "Jeannie and the Marriage Caper," after Captain (rank is correct) Nelson had shoved his Japanese Houseboy (Jeannie in disguise) away from the table via an elbow to the hip before he/she said something compromising to his fiance (!) and her father.

And changing channels, here's young Diana Rigg as Emma Peel, undercover without much cover in "The Avengers" episode "Honey For the Prince.." 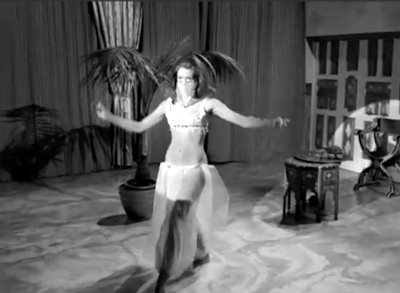 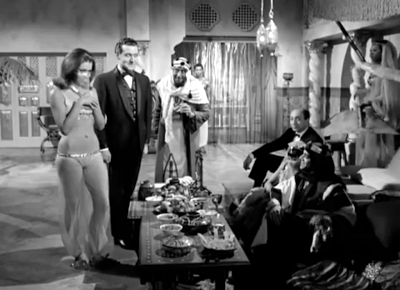 As she is shuffled off to the Harem, Emma hitches up those Turkish Trousers before they have to reshoot the scene for mid-1960's American TV: 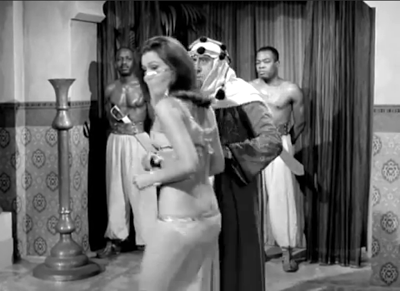 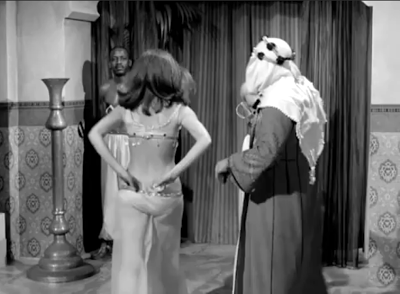 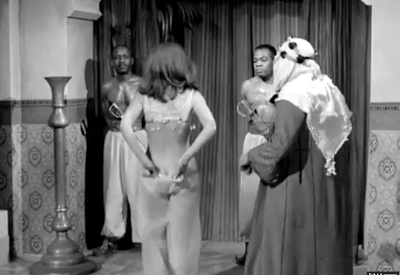 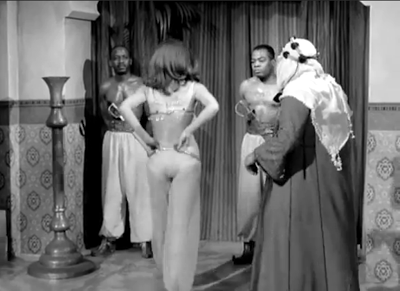 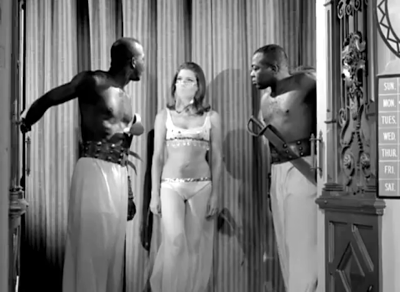 Now I forgot what I was writing...

Writing, oh, yeah!  There are some fine stories over at ""D & D" this week. with some favorites who have been away returning!  Enjoy!

I bet you remember the first few times in your very early years that you saw some spanking on a cartoon show and thought, "Huh!" 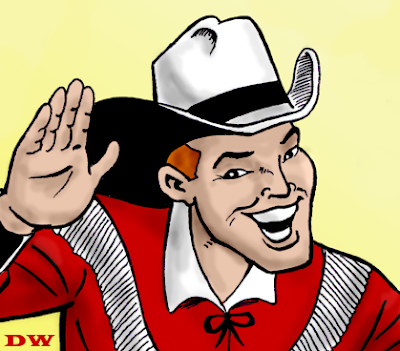 Y'see, Kids, back in the Olden Days of Only-Three-Channel, Mostly-Black-And-White Television, there were live (and taped) local children's programs, usually on weekdays after school, that followed the format established by Buffalo Bob and Howdy Doody when the Medium was newer:  A Cowboy, or a Clown, or a Sailor, or Somesuch Host who cavorted with Puppet and People Sidekicks, doing live commercials with a studio audience of kids, and showing cartoons!

There were several I really liked.  One of 'em actually did come on TV grinnin' and wearin' pistols and a hat!  He wasn't a Kansas City Star, though, but was a hit in Oklahoma City whom we got to see while visiting the grandparents in the 60's.  His name was Foreman Scotty, 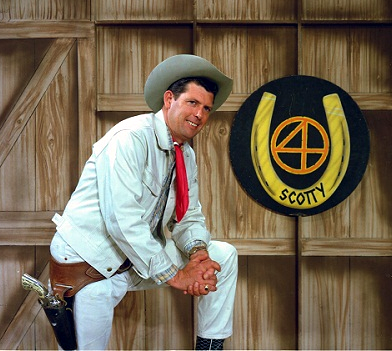 and the unique appeal of his show was that besides the cartoons and studio bits, he'd show the adventures he had with his fellow ranch-hands, kinda like a lower-budget version of Gene Autry or Roy Rogers. 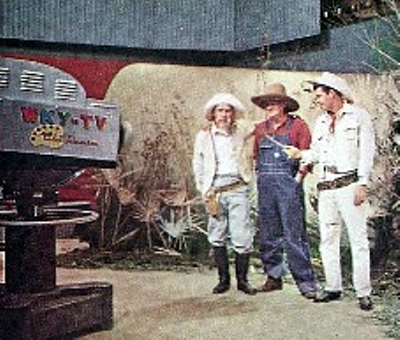 But possibly my favorite was Kitirik on KTRK, Channel 13, when we lived in Houston, Texas.  Channel 13's logo-mascot was a black cat (get it?) and so their afternoon kids' show host, whose name came from their call letters, was a woman in a cat costume:  a wimple with ears, drawn-on whiskers, black leotard and gloves, a tail, and fishnet nose.

Now, she never went Julie Newmar with this;  she was never sly, sultry and slinky, just fun, your playful big kitty buddy.  However, I'm sure the fathers who were home at that hour never minded peering at her over their papers. 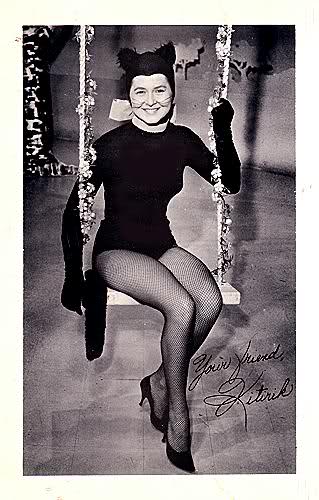 They don't do this sort of thing these days because the Federal Communications Commission and their bosses decided that hapless children are unduly influenced to buy crap promoted by TV People, but mostly because owners of local stations would have to spend money to do it.

Anyhow, while watching these programs all those years ago, studying and honing my humor for my own cartooning career, I noticed that nearly every big cartoon star at some point spanked and / or got spanked:  Felix the Cat, Woody Woodpecker, Popeye, Porky Pig, Daffy Duck, and even Bugs Bunny!  Of course, a lot of "one shot" or "limited" characters wound up with their ends up, too.

It never ever failed to grab my attention, but I began to feel it was disappointingly unfair that there were never any female characters getting spanked!

For instance, you could count on Little Audrey winding up over someone's knee pretty frequently in the comics, but I never saw it in the animated cartoons!  There was the time she dreamed the fish sizzled her seat for a few seconds in the "eel-lecric chair," which pushed a couple of buttons...

I think it was Hermione who referred to Audrey and similar little girl characters as "white-bottomed cherubs!"  Maybe it would have been crossing a line to enjoy their fanny-whapping just a little too much?  Perhaps the owners of paddled po-pos should be a bit older, say, at least Tinker Bell's age...

or like the young woman in the Hanna-Barbera "Speed Buggy" TV cartoon who got her butt buzzed by a bee! 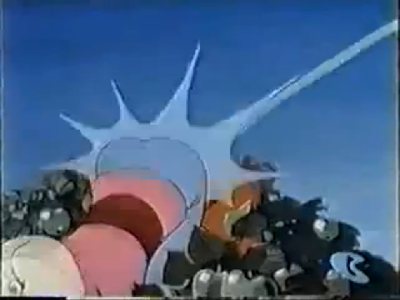 Well, here's a dandy batch of stills that you may not have already seen.  They're from one of the better versions of  the story of "The Three Bears," a 1935 "Comicolor" cartoon done by animation pioneer and Mickey Mouse's co-creator, Ub Iwerks!

Near the climax, the bear family is chasing invader Goldie through the house and they all tumble into the closet.  In the ensuing fracas, Papa Bear thinks he's caught the culprit in the dark!  But as the door opens again, we see that he hasn't. 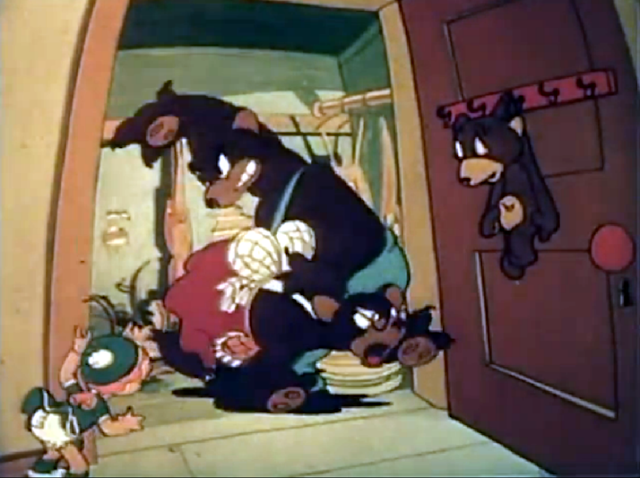 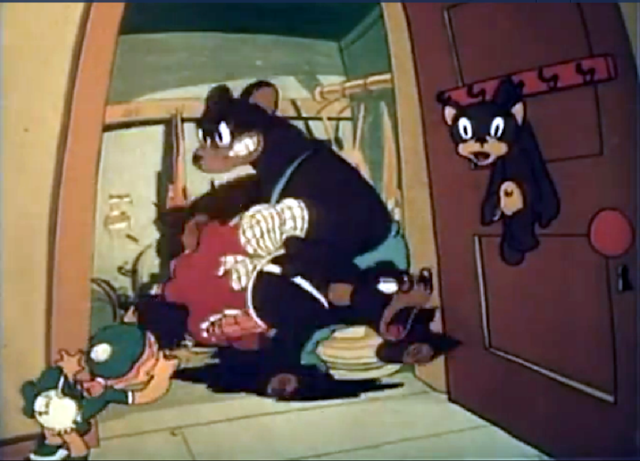 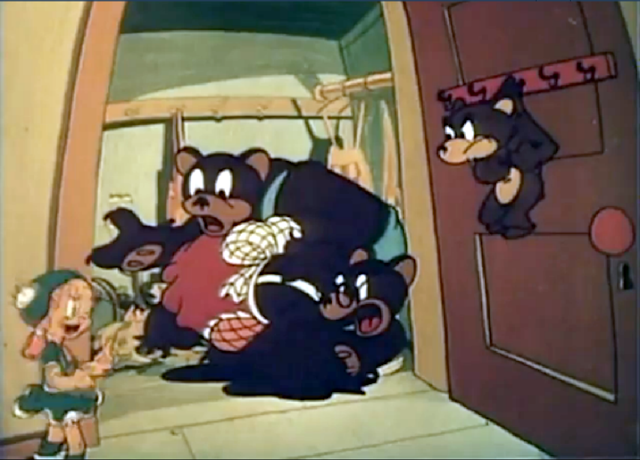 So Mama Bear clocks him, and the seat of Goldilocks' Minnie Mouse patched panties appears to be in grave peril. 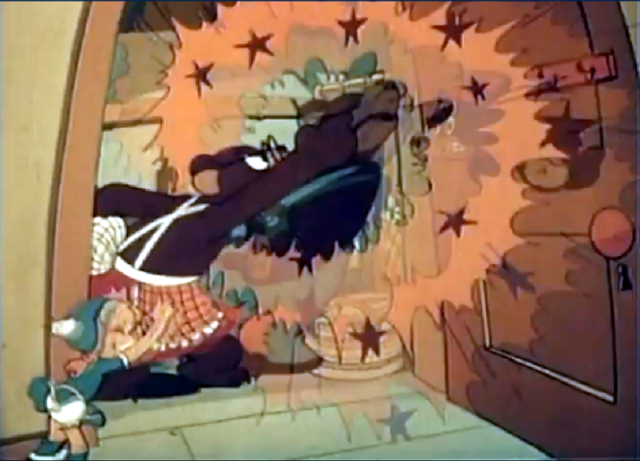 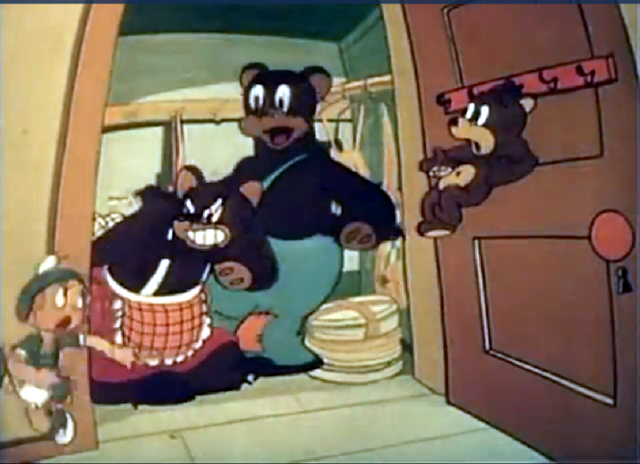 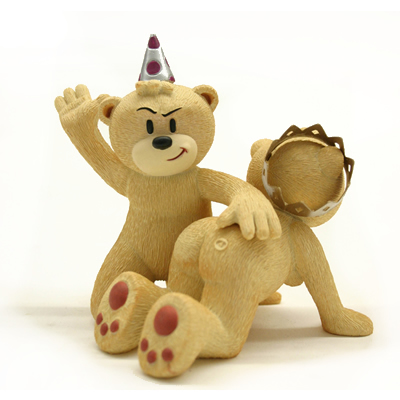 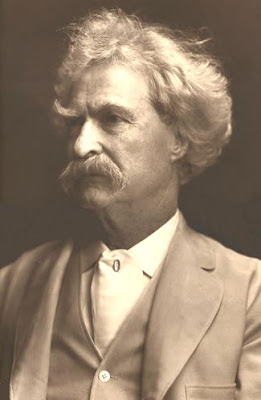 Yes, you read that right.  I ran across this gem in the book "Weird History" by John  Richard Stephens, and do recommend the book.

Stephens notes the unspeakable things they were doing and saying to children and others regarding "self-love," and compares Twain to Lenny Bruce in that he used ribald humor to make a statement about society.  I've procured a copy online, and share it here for your edification and enjoyment.

Some Thoughts on the Science of Onanism
A speech delivered to the Stomach Club,
a society of American writers and artists,
Paris, 1879
by Mark Twain


MY GIFTED PREDECESSOR HAS WARNED you against the "social evil --- adultery."  In his able paper he exhausted that subject; he left absolutely nothing more to be said on it.  But I will continue his good work in the cause of morality by cautioning you against that species of recreation called self-abuse to which I perceive you are much addicted.  All great writers on health and morals, both ancient and modern, have struggled with this stately subject; this shows its dignity and importance.  Some of these writers have taken one side, some the other.

Michelangelo and all of the other old masters--"old masters," I will remark, is an abbreviation, a contraction --- have used similar language.  Michelangelo said to Pope Julius II, "Self-negation is noble, self-culture beneficent, self-possession is manly, but to the truly great and inspiring soul they are poor and tame compared with self-abuse."  Mr. Brown, here, in one of his latest and most graceful poems, refers to it in an eloquent line which is destined to live to the end of time--"None knows it but to love it; none name it but to praise."

Such are the utterances of the most illustrious of the masters of this renowned science, and apologists for it.  The name of those who decry it and oppose it is legion; they have made strong arguments and uttered bitter speeches against it --- but there is not room to repeat them here in much detail.  Brigham Young, an expert of incontestable authority, said, "As compared with the other thing, it is the difference between the lightning bug and the lightning."  Solomon said, "There is nothing to recommend it but its cheapness."  Galen said, "It is shameful to degrade to such bestial uses that grand limb, that formidable member, which we votaries of Science dub the Major Maxillary --- when they dub it at all --- which is seldom,  It would be better to amputate the os frontis than to put it to such use."

The great statistician Smith, in his report to Parliament, says, "In my opinion, more children have been wasted in this way than any other."  It cannot be denied that the high antiquity of this art entitles it to our respect; but at the same time, I think its harmfulness demands our condemnation.  Mr. Darwin was grieved to feel obliged to give up his theory that the monkey was the connecting link between man and the lower animals.  I think he was too hasty.  The monkey is the only animal, except man, that practices this science; hence, he is our brother; there is a bond of sympathy and relationship between us.  Give this ingenuous animal an audience of the proper kind and he will straightway put aside his other affairs and take a whet; and you will see by his contortions and his ecstatic expression that he takes an intelligent and human interest in his performance.

The signs of excessive indulgence in this destructive pastime are easily detectable.  They are these: a disposition to eat, to drink, to smoke, to meet together convivially, to laugh, to joke and tell indelicate stories--and mainly, a yearning to paint pictures.  The results of the habit are: loss of memory, loss of virility, loss of cheerfulness and loss of progeny.

Of all the various kinds of sexual intercourse, this has the least to recommend it.  As an amusement, it is too fleeting; as an occupation, it is too wearing; as a public exhibition, there is no money in it.  It is unsuited to the drawing room, and in the most cultured society it has long been banished from the social board.  It has at last, in our day of progress and improvement, been degraded to brotherhood with flatulence.  Among the best bred, these two arts are now indulged only in private --- though by consent of the whole company, when only males are present, it is still permissible, in good society, to remove the embargo on the fundamental sigh.

My illustrious predecessor has taught you that all forms of the "social evil" are bad.  I would teach you that some of these forms are more to be avoided than others.  So, in concluding, I say, "If you must gamble your lives sexually, don't play a lone hand too much."  When you feel a revolutionary uprising in your system, get your Vendome Column down some other way --- don't jerk it down.