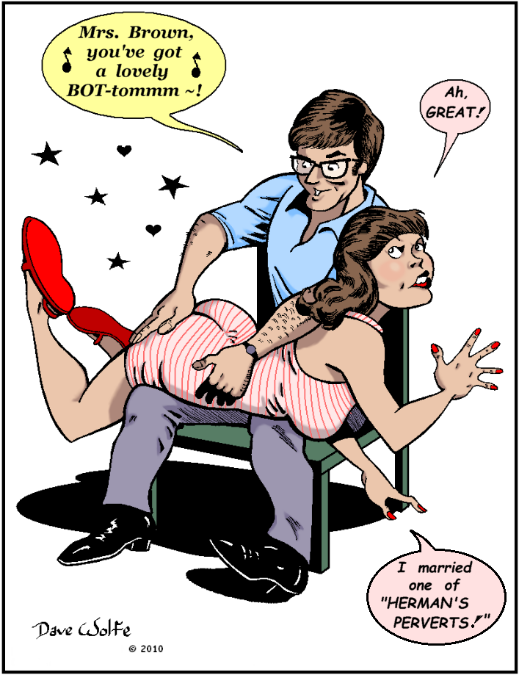 Pardon Me, Your Process Is Showing

In the previous post, an Unnamed Source (it might have been A. Nonny Mouse, but I can't be sure) wanted to know how WolfieToons are born. 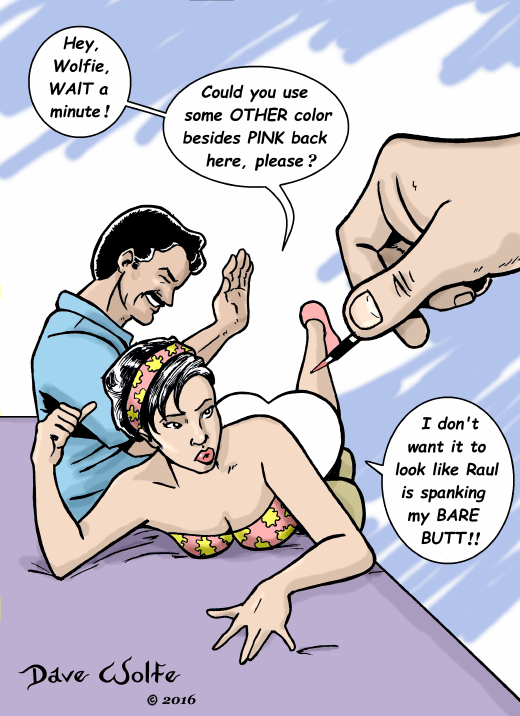 Getting the ideas is a deliberately conscious process, derived from a joyous lifetime consumption of comedians, cartoons, comics, humorous friends and relations, and being a Wisenheimer In General.
When I was working to a deadline, current holidays and seasons might suggest something.  Many more ideas get tossed than used;  it's kinda like digging through coal for diamonds.  Well, come to think of it, very few of my finished cartoons are actually gems, anyway. 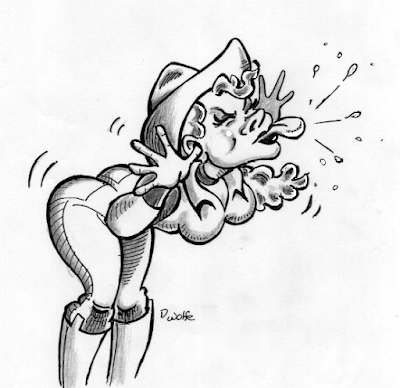 So, with some idear in mind, I start sketching and looking at photo references, trying to get the best staging for the gag, something cute and sexy that maybe I haven't already done a bunch of times.  I "build up" the characters from basic shapes.  It can be frustrating.  I erase a lot more now than when I used to be able to steal typing paper from work. 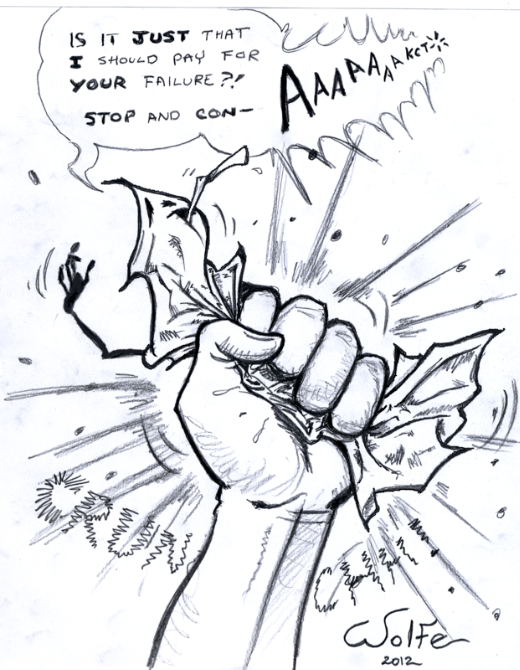 I start out with a fairly complete pencil drawing.  Other cartoonists are looser, doing most of their real drawing while inking, but they have more confidence than I.  I prefer to know exactly where I'm going.
After the pencil, I ink, usually with pens, then scan, do any clean-up, and letter and color on the computer.  Here are examples! 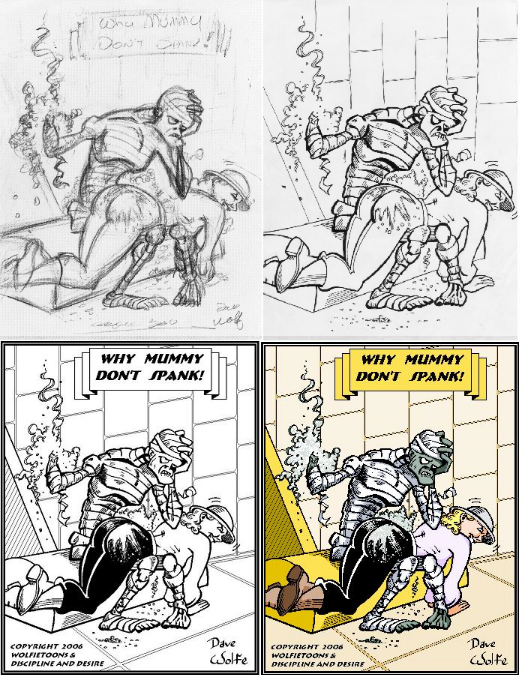 Speaking of paddles, I had to adjust the staging for "The Wolfie Board" to make it clear what was going on! 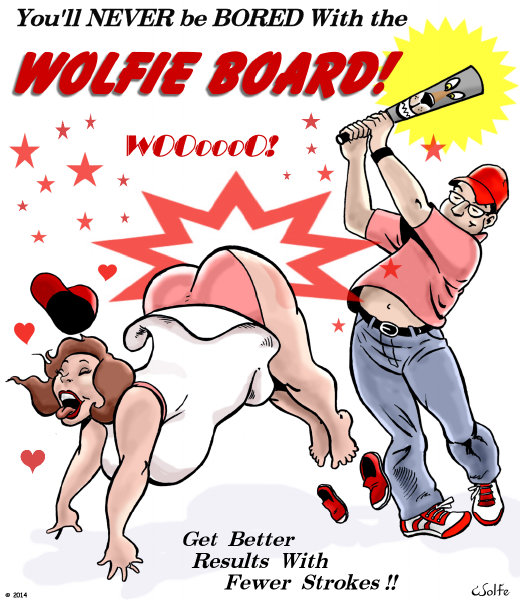 As Larken would say, "YIKES!!"
Looking at that one again, I'm not sure if it's really funny or really disturbing.  Maybe disturbingly funny?
Sometimes, like a lot of Engineers I've worked with, I keep fixing stuff that's not broken until it is.
For example, I decided to abscond with Dan DeCarlo's "Hillbilly" joke about the Daisy Mae-type gal wanting a spanking from the handsome, hunky, young Li'l Abner-type guy nearby instead of the long-bearded ol' codger on whose lap she was already perched.
This "borrow" was going to be all right because it would be changed to a Police Scene, and I'd make it an "homage" to Dan's "Josie" comic book covers.
At first, our Cat-Suited Burglar was facing the audience;  then I thought maybe I should better mimic the staging of Dan's "Hillbilly" cartoon, and turn her around to show you her fanny head-on. 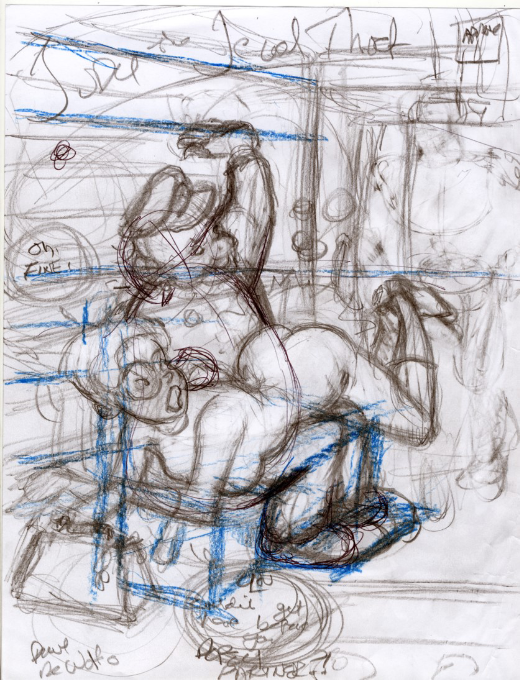 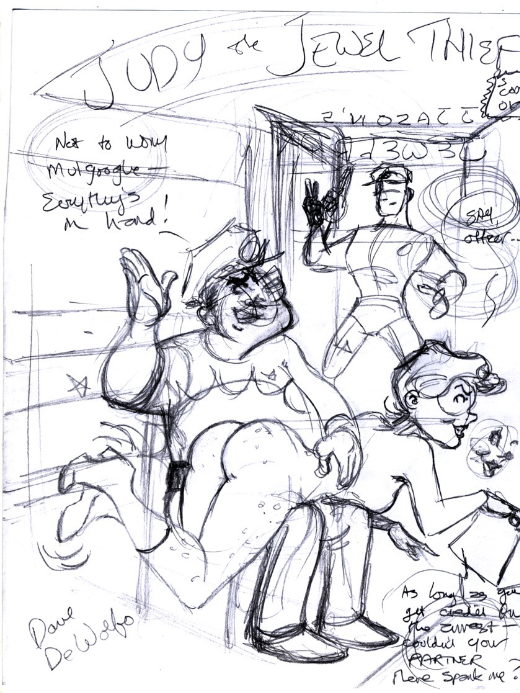 --and then two things went wrong.
First, the editor of "Discipline & Desire" said our Website Host, for Zeus knows what reason, was cracking down on bare bottoms (attempted pun) and asked me not to do any.  This made me spitefully determined to depict denuded derrieres, but in a way as to comply with Ye Ed's wishes and not have our Web Host throw "D&D" out on its ass.
Secondly, and just as inexplicably, I decided to try a different cartoon style instead of an attempted aping of DeCarlo. 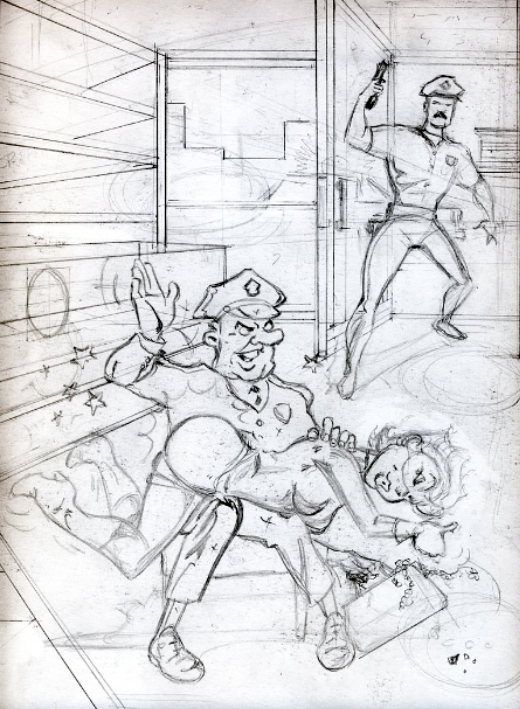 The result was a weaker set-up, and lost any humorous reference to Dan.  The final result was not bad, but not as good as what I started, in my questionable judgment. 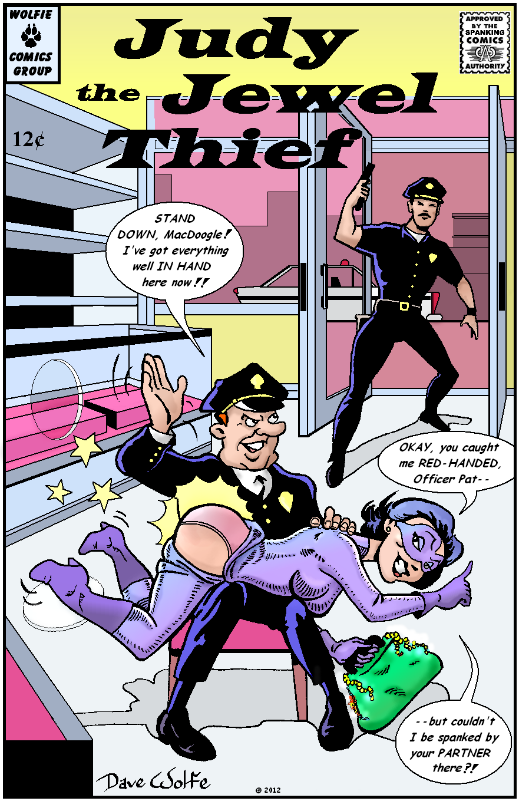 As you see, I relented.  A naked side view of her little butt without cleavage would have gotten by, but it seemed that having her revealed pink panties was funnier and/or sexier, anyway.
Well, most times the changes along the way are for the better: 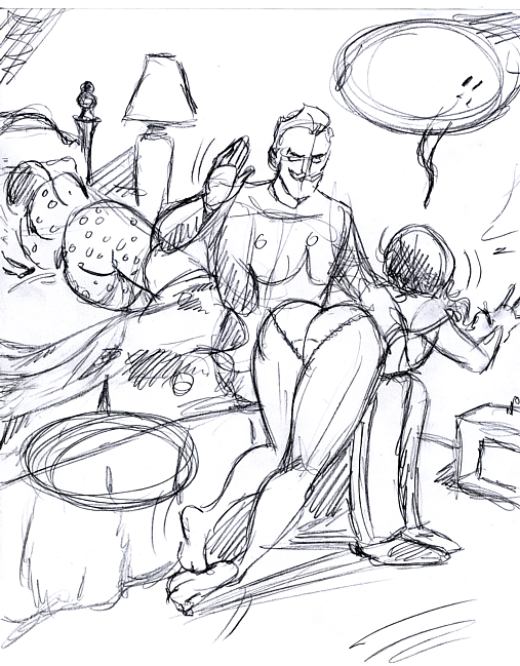 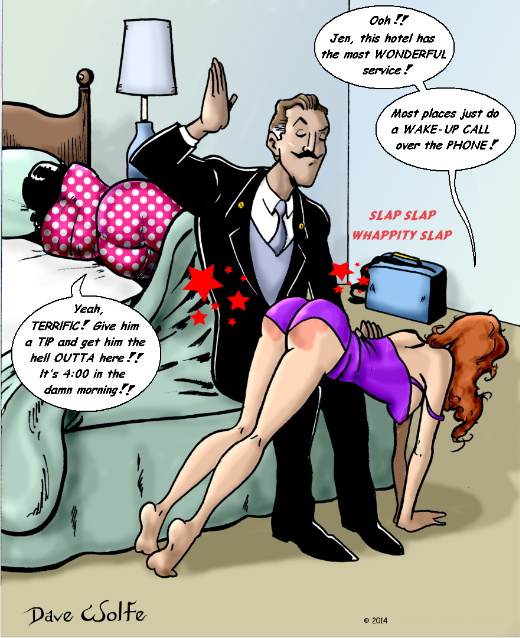 The Halloween 'toon below was pretty straight-forward.  My spanker is a caricature crash between Vincent Price and John Carradine, with Peter Cushing as an innocent bystander. 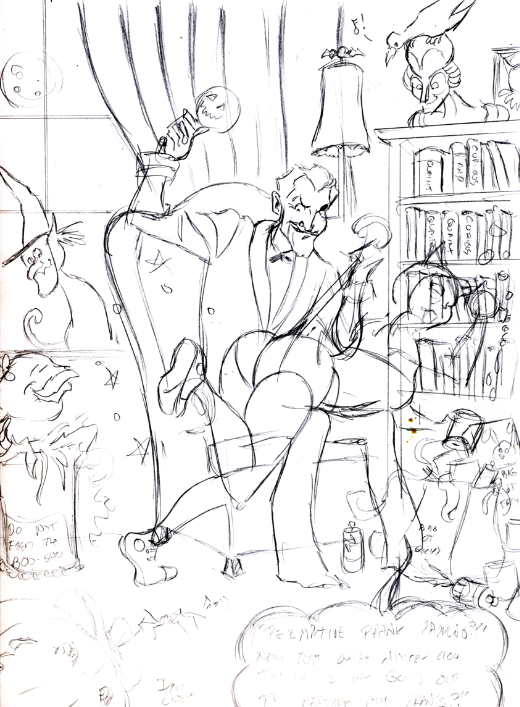 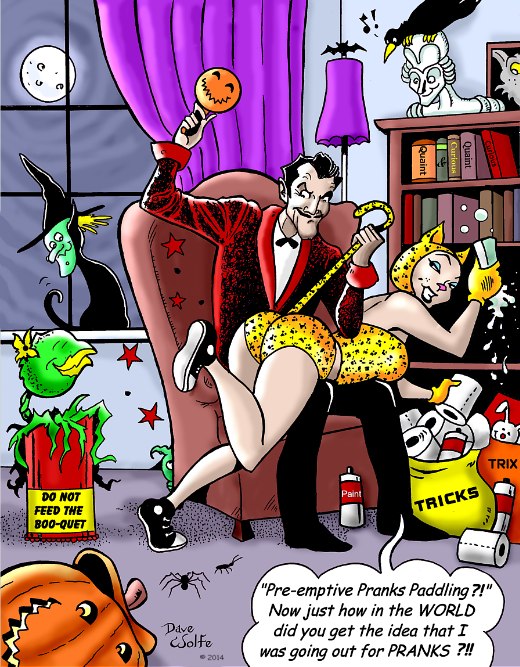 During the inking, I decided that leaving the lower shelves in black would help her sly face, and the somewhat subtle soapy symbolism gag stand out better.  I also took the time to put in extra background gags, à la "MAD" cartoonist Will Elder's "chicken fat" method!
Maybe it was a Poe attempt.
(Ba-DOOM, Ching!)
So here's a "blog re-run" of WolfieToon Progress, to wrap!
A fairly tight pencil: 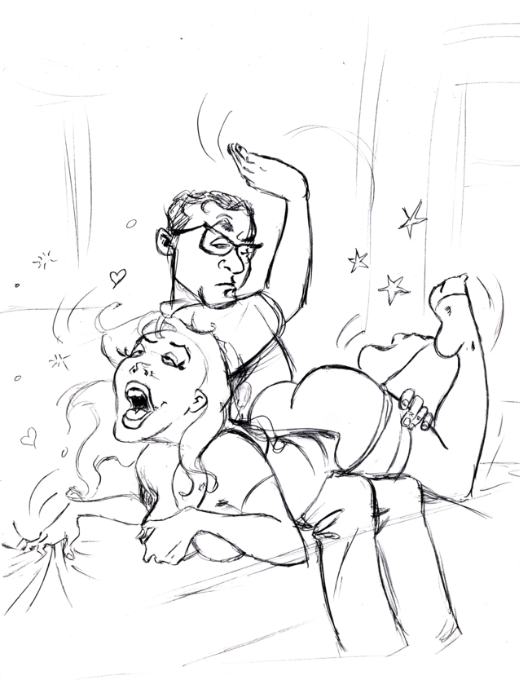 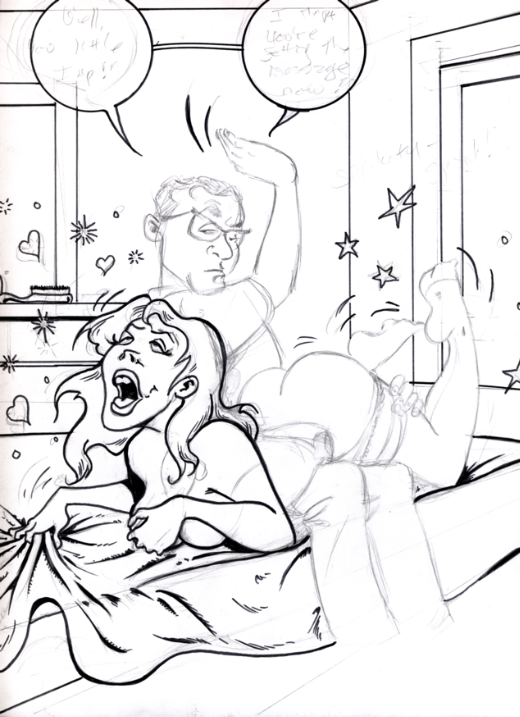 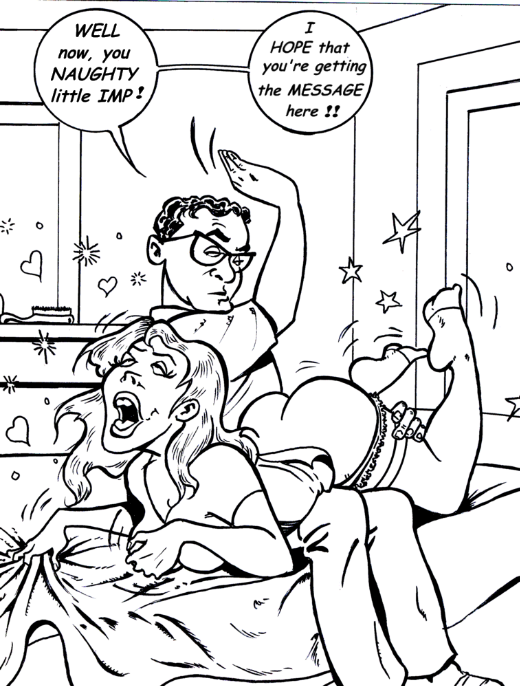 Some Color and stuff, and, Viola!
No, that's a little fiddle.
And Voilà!  She's "Getting the Message!" 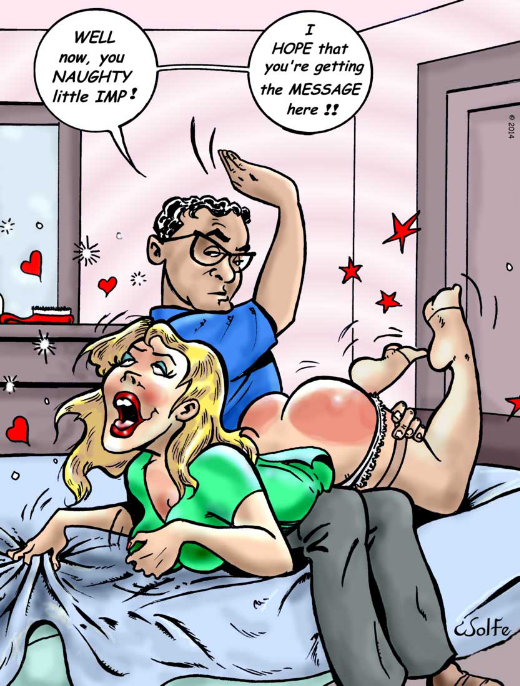 Thanks for giving me another chance to show off!
We now return you to your regularly scheduled InterWebs browsing, already impeding Progress.
Posted by Dave Wolfe at 1:33 AM 16 comments: 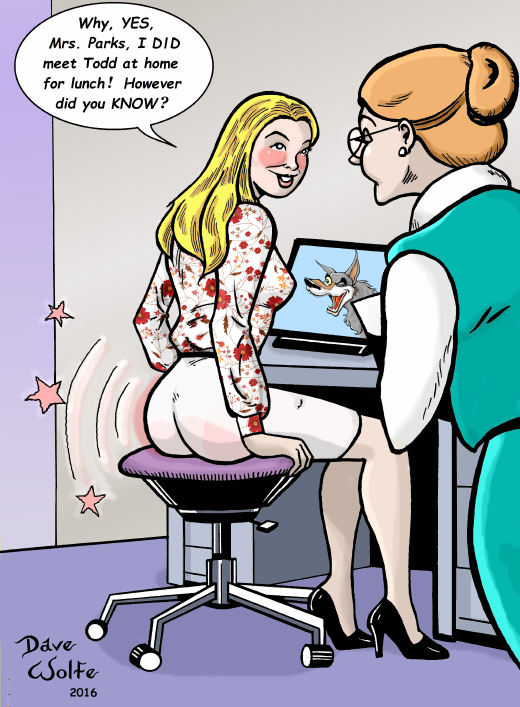 After Dinner and Before Cake~~

Here's a brand-new WolfieToon for all of you wondering what that couple down the road is doing in Quarantine... 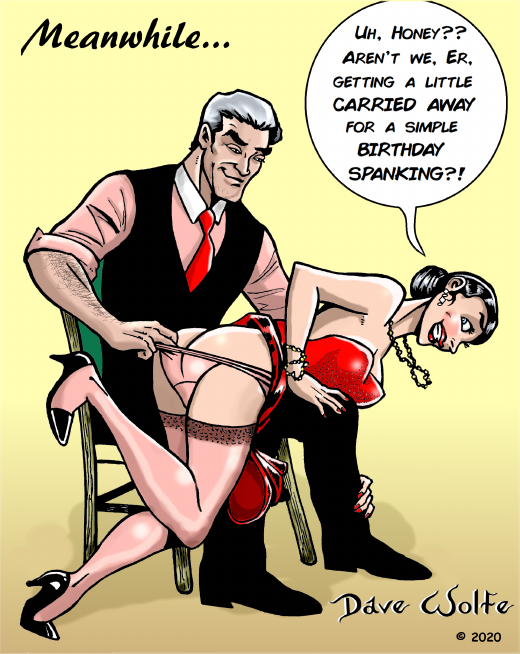 -- of securing exciting entertainment while you seclude yourselves! 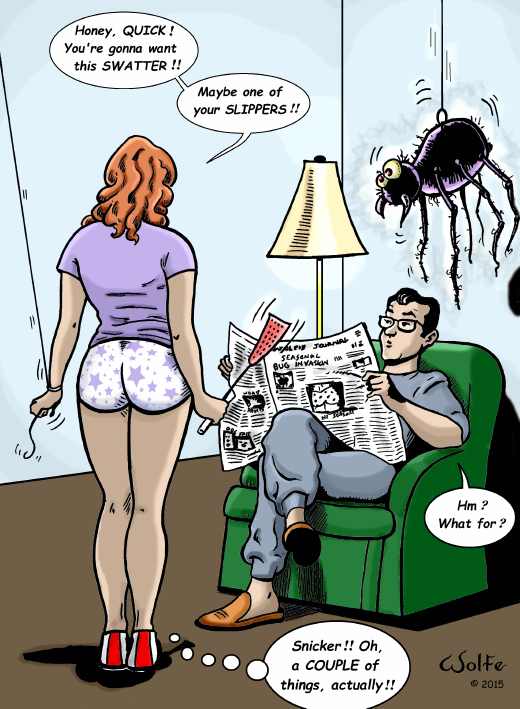 Of course, if you don't have an enormous artificial arachnid, or the materials with which to create one, here are some other ideas from THIS PAGE of "The Bad Girls' Bible!"

And if you wish to share your tale, I am, as you can tell from my avatar above, All Ears!!